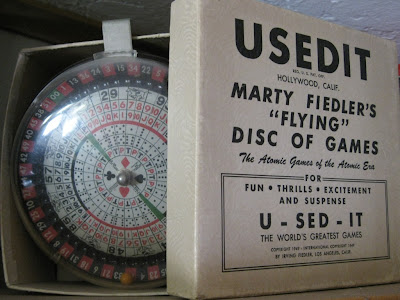 This is part of a game I inherited from my grandaunt, Mary Louise Wilcox Brown. I suspect she received it from the game's creator as it has (not shown here) score sheets in an obviously home-crafted bag; the graphics all appear to be created as a sample - one copy of each game form - so this might have been the prototype. Here's what I know:

The apparatus works like a roulette wheel - you push a lever on the side and the wheel inside spins, sending a little ball around and around until the spinning stops. Then, depending on which of the many games one is playing, the cards or pieces are played accordingly. This is obviously many games in one. According to the Catalog of Copyright Entries, Third Series: 1964: January-June, the copyright was applied for in 1964 as "the atomic game of the atomic era"; it is called "52 card roulette." As can be seen on the box, this copyright is 1949 with the phrase "the atomic games [plural] . . ." and notation that it is registered in the US patent office. Was this ever actually sold? Googling "Usedit" gets me nowhere (except to sites where someone forgot to put a space between "used" and "it" . . . lots of sites with that!).

As can be seen on the box, the pronunciation would be "U-sed-it" (as in "you said it"), not "usedit" (as in "used it"). But I see no indication of anyone "saying" one thing or another, so its name alone could be confusing (maybe that's why it was changed by 1964 when the Fiedler names - Irving and Marty - are given as you see them listed here . . . maybe one was the creator and the other was the financial backer . . . Marty Fiedler is listed in another source on games as a "California entrepreneur"). The phrase "flying disc of games" is not included in the 1964 explanation of the product. I would love any ideas on what it is I really have . . . something my grandaunt's friend created? something she picked up at a garage sale? She and her husband, John Brown, played many games and often with friends (they lived in Studio City in the San Fernando Valley of Los Angeles County, California, from about the 1930s until Mary Louise's death in 1995 when John returned to their home state of Texas), so it stands to reason that, if one of their friends had created or come upon a new game, that they (my relatives) would have gotten their hands on it; but it shows little, if any, actual use.

Is it a treasure? You tell me! It was in their game chest, so it's a treasure to me.
Posted by Jean Hibben at 8:00 AM