My dear brother clipped and sent me an article from the Chicago Sun Times from 17 March 2014 (sometimes it takes my bro a bit of time to send me the things he believes I’ll be interested in . . . but I’m equally as guilty, having just sent him a gift I purchased for him back in about that same year and month). The article on pages 28 and 29 is titled “Love between a Brother and Sister.” Maybe he saw it and thought of us, clipping it to remind me of the relationship we’ve shared for over 66 years. He’s a good guy to think of me in that way (if that’s not what caught his eye, I’ll just pretend it is). Maybe the most impressive part of this “gift” is that my brother obviously read the article before sending it to me, which I know because he marked a section he thought was particularly interesting and would be of similar interest to me. He was right.

The article is about Peggy Seeger, who was to be a performer at the Old Town School of Folk Music in Chicago about the time the article was published. The author, Mark Guarino, interviewed her about her familial connection to Pete Seeger and the music world, in general. Peggy lives in New Zealand now, but has long been part of the “folk scene” in America. I have seen Peggy in concert a few times over the years from the mid-1960s on and have always enjoyed her performances. Peggy and Pete were half-siblings, Pete being the elder (he passed away at age 94 in 2014). I cannot count the number of times I have enjoyed Pete in concert, even, once, having the opportunity to him with his sister in a joint performance. So many years and so many songs ago.

I’ve been making music with friends and family just about since I could talk. My father got me singing when I was three or four years old and I memorized the songs that I was too young to read. He’d play piano while I’d sing. When I visited my paternal grandparents, my grandmother got me singing the “Jesus songs” and my grandfather would teach me songs from his southern roots (decidedly not about Jesus and completely politically incorrect today). Then as I got older I started playing instruments (Dad tried to teach me the piano, but it was an exercise in futility – no fault of his; we didn’t know then about dyslexia and it’s negative effect on my ability to read notes). I first played my grandfather’s harpeleik – a Swedish zither, which he eventually gave to me, and then I graduated to ukulele and harmonica and, finally, guitar. But I also picked up the banjo about the same time, learning with some “instruction” from a public television program of Pete’s. In fact, it was Pete’s book on learning to read music that has aided me in some of my understanding of theory (I also took a couple of college courses in the subject, many years later). So I guess my brother’s kindness in sending me that article has brought me back to my childhood – at least in memory.

And what I just wrote connects to one of Peggy’s responses to the interviewer’s questions. Quoting her from that article about music in general and folk music in particular, she says: “We’re all unique and we have our own potential. And there’s music in essentially every child that’s born. But it’s snuffed out by becoming a consumer instead of a producer. Because our educational system teaches us to be a consumer; it does not teach us, on the whole, to produce . . . What Pete said was, ‘You can do this, you can make up music, you can sing music.’ How simple it is to make a song yourself. And the act of creation is intensely important to human beings. It really is. Intensely. You feel better, you walk more tall, you get along better with other people, you feel that life is your own unique thing as well as a community thing. Pete brought out this individualism, he also brought out the community singing together. So it’s global and local, it’s large and small, it’s personal and general.”

(If you aren't familiar with Peggy and her music, here is a recording of her, singing the song her husband, Ewan MacColl, who died in 1989, wrote for here: "The First Time Ever I Saw Your Face." To read about Peggy's amazing life, check out her memoir book: First Time Ever, available in Kindle format from Amazon.)

I’ve been writing songs since high school (my first efforts were in Math class, since I did each lesson the night before with my father as the teacher – nothing our instructor said was new to me, so I wrote songs). I’ve been adding verses to songs already written by others to make them more personal or connect them to my topic, in the case of using music in my genealogy presentations. Back in the 1960s, Pete encouraged his readers (of “Johnny Appleseed, Jr.,” his column in Sing Out! magazine) to add verses to Woody Guthrie’s “This Land is Your Land.” I tried my hand at that and sent the result to Pete (see blog post from 11 August 2011) and he kept it and printed it in a book dealing with the history of folk music (giving me appropriate credit, of course). 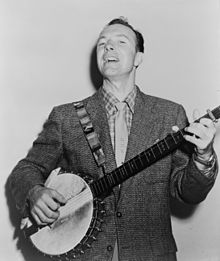 When we were kids, my brother (who is six years my senior) would make up songs to tunes we already knew, then teach them to me. We sang about our stuffed animals and their adventures. We sang commercial jingles together. And, I’m pleased to say, my father recorded us, so those early attempts at being budding composers and performers would not be lost. Of course, neither of us will play those recordings for anyone, but we had fun and the music filled the gap of the half dozen years that separated us in most everything else (we did not even attend the same school except for two years of our lives, and that was only because I went to pre-kindergarten and kindergarten at his elementary school . . . but we were on different floors and had different start and dismissal times, so we really didn’t even notice each other unless Mom drove us both to school, which she rarely did). Even “all-school” activities and assemblies omitted the little kindergarteners, which I’m sure was met with approval by all those bigger kids from upstairs.

Speaking of school, my favorite time in school was music. The music teacher would come in, often with some marvelous item we could use to make music. Or our art teacher would instruct us in making such an item – I remember most vividly the “sand blocks,” but I know there was an oatmeal container that miraculously became a drum. Sometimes the music teacher let us choose the songs. Sometimes we’d learn something new and I’d share those with my Dad (who, of course, already knew the songs) and we’d “do” them together.

My point here is that music is, as Peggy said, personal, and it becomes a panacea for some of the stressful events that we must endure in various arenas in our lives. When I sing a song, I find myself forgetting the nitty gritty for a moment (I know it will still be there when my music time comes to an end, but an escape, even for just a few minutes, can make the inevitable “crap” much less “crappy”). It’s just my opinion, but it’s been working for over 60 years of my life.

Sing on and stay in tune!

Looking for more information on the Seegers? Check the Library of Congress.
Posted by Jean Hibben at 11:36 AM No comments: