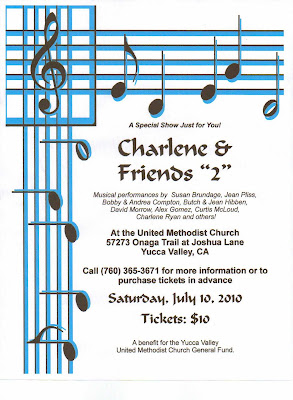 Yesterday was a unique experience and a really enjoyable time, in spite of 100+ degree temps. Butch & I, along with a select group of musicians & singers, shared the stage in a variety show for the United Methodist Church in Yucca Valley, Calif. entitled "Charlene & Friends" (the organizer was Charlene Ryan-Moore, organist for the church and amazing talent on piano, organ, accordion, and voice). What a talented group! I was honored to be in their presence. We sang & played instruments from about 2 to 4 pm, with a range of genres that is not likely to be found in one location very often. From Bach to Country music, from polkas on the accordion to old ballads on the saw, from originals to traditional pieces . . . this was truly an event that had something for everyone!

I thought it would be fun to keep the idea of a musical variety show going by pulling a common theme from the program: Friends. Charlene impressed upon the audience that, though some of the performers she had known for less than a couple of hours, they were friends on the basis of being friends of friends (of friends . . .).

Friends were a large part of my family's life, not only in recent years, but back in earlier times. When I sorted through family photos, many included the neighbors, fellow parishioners, coworkers, classmates, etc. And sometimes they got together, as friends, to share songs and good times. So, using Charlene's theme, how about songs about friends or songs sung with friends (by you or your relatives)? (If you choose the latter, be sure to explain how the song connects to the theme.) As a reminder, Sunday Singalong can be a full list of the lyrics, the posting of a verse and/or chorus, or just the title of the song. Or provide a link to the lyrics on line, an MP3, or a YouTube video.

One of my mother's favorite songs was "Ramblin' Boy," about two friends who stuck through everything together, even if it meant that one person's potential for a good job was jeopardized. My friend, Tom Paxton, wrote the song back in the early 1960s. My mother died in 1994, but up until just before her death, virtually every time we gathered as a family to share music, Mom would ask for "Ramblin' Boy." Maybe she was reminded of her own childhood best friends, or maybe she enjoyed the theme of being so close that the two were willing to sacrifice everything for the companion. Whatever it was, Mom's love of that song will always be part of my memories of family gatherings.

To hear & see Tom sing this song in fairly recent times, click on the YouTube concert at the 2008 Philadelphia Folk Festival; but to go back in time to 1965, click on the YouTube interview of Tom with Pete Seeger on Pete's Rainbow Quest television program where the two of them sang it together. (Note the difference: The second to last verse originally was "late one night in a railroad camp"; in more recent years, Tom changed that to ". . . a hobo camp." Whichever way, I don't think I can ever hear - or sing - that song without thinking about how much my mother loved it.) Thanks, Tom, for giving us a great song about friendship . . . and thanks for being a great friend!

So invite your friends and let's singalong about friends!
Posted by Jean Hibben at 8:00 AM