My blogger friend Bill West, whose music and family stories tastes seem to run right along with mine, has challenged his readers to find poetry or song lyrics that are ancestrally related. Here are his rules and my responses to them:

1. Find a poem by a local poet, famous or obscure, from the region one of your ancestors lived in. It can be about an historical event, a legend, a person, or even about some place (like a river)or a local animal.Or if you prefer, post the lyrics of a song or a link to a video of someone performing the song.

I love the option of "obscure," because that is exactly what this poet was. She was my grandmother and, even during the time I knew her (my early childhood) I think "obscure" would have been the perfect label. Her poetry usually was religious, but she often wrote poems to honor a friend, family member, or well known person. However, she had a humorous side to her and that would come out in odd ways in her poetry. Because this challenge is asking that the poem be about an event, person, or place, etc., I think that this particular piece (though not stated as being autobiographical, obviously was) fits perfectly.


2. Post the poem or song to your blog (remembering to cite the source where you found it.)

The poet, about four years before she penned this piece

Among my grandmother's effects were all of her writings. I took on the chore of transcribing all of her English works (I have yet to tackle the many written in German). So the citation is as follows:

Oh, how many aching feet
Can be found at night,
When the street car is so full
And we're packed so tight.

Don't you talk about a seat,
Such a thing is rare,
As there's hardly standing-room
For the people there.

Some of them have stood all day,
And their feet do ache,
But to stand and hold a strap
That just takes the cake.

And the straps are up so high
That it is no snap
For a girl who's naturally short
To hang on a strap.

But the worst of all is this:
If some heavy form
Comes along and plants his foot
Right upon your corn.

Oh, what dreadful agony
We do have to bear.
But we're just compelled to pay
The same five cent fare.

3.Tell us how the subject of the poem or song relates to your ancestor's home or life.

Pauline Elizabeth Miller met my grandfather about ten years after writing this poem. Prior to their meeting at the Moody Bible Institute in Chicago, Illinois, my grandmother lived in Chicago and had to take the street car to get to work (she was a stenographer). Her reliance on public transportation obviously was not always enjoyed, but her sense of humor, plus the need for her income to augment what little the family had, surely saw her through the worst of it.

During her adult, single life, she cared for her mother and helped to put her younger brother through school. She was a devout Baptist, besides attending Moody, in later years she worked for Paul Rader at the famous Chicago Tabernacle, doing secretarial work for him, still commuting by street car and, later, buses. 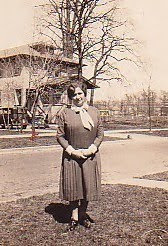 Pauline Miller Wilcox, in the early 1900s, Chicago, Illinois
Pauline was a short woman who had suffered from whooping cough as a young child. For some reason, her doctor had her wear a body cast and then the physician just disappeared (he may have died; no one is certain), leaving her body in the cast for many months, causing an unusual spine curvature which resulted in her small stature that probably would not have been her lot had the cast been removed in a timely matter. 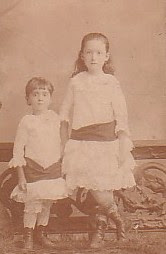 Pauline (on the left) with her older sister Ottillie (they were only two years
apart in age and Pauline was about four in this photo, being after she
was out of the cast, but the damage was done).
Photo ca. 1883, Milwaukee, Wisconsin

Throughout her unmarried adult life, Pauline wore shoes that were fashionable, in spite of the pain they caused her feet. As a result, she was plagued with foot problems so severe that, in later life, the podiatrist would make house calls. She always told me to "wear shoes for comfort, not fashion," and I have followed her advice throughout my life. These various details of her life are all expressed in this poem, making me believe that it is autobiographical. 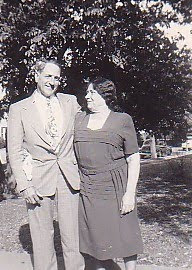 Lee Alfred Wilcox, my grandfather, and Pauline, 1955, Wilmette, Cook, Illinois
(notice Pauline's stature)
4.Submit your post's link here to me by November 18th and I'll publish all the entries on Thanksgiving Day, November 25th!
Posted by Jean Hibben at 6:59 PM