And the band played on

We are returning from a great weekend at the Glendale, AZ folk & heritage festival where we did some workshops, a short concert, and jamming. I spent time relaxing with the dogs by the camper and reading while listening to music all around me. What a peaceful experience. 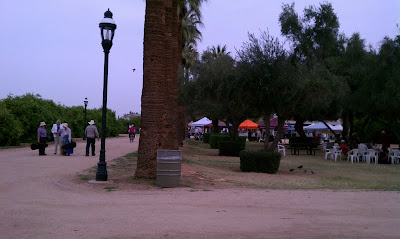 At night we camped at Barbara & Chuck's and enjoyed a more intimate music setting. We have found that festival days really wear us out & end up heading to bed around 8pm these days! (Quite a contrast from years past at Songmaker campouts where we were still playing at midnight.) But going to sleep with the music surrounding us is a very comforting experience, for me, at least. Those bands (often formed right on the spot) with fiddles, autoharps, banjos, guitars, mandolins, and even various kinds of drums just played on and on (still going at 2am on Sat. night, I hear). Reminds me of the song of the same name. But the music lovers don't play the tunes just during the good times . . .

While watching a History Channel program about the sinking of the Titanic, I was struck by the legendary event of the band on board. As most everyone knows, that band played on and on as well. The doom was obvious and imminent, but the musicians fulfilled two purposes in their playing on and on:

1 - As any died in the wool musician will tell you, holding, caressing, and playing his/her instrument gives one amazing comfort and pleasure. No doubt the musicians found more security and peace holding their beloved tools of the trade. Clinging to their instruments gave them more a sense of purpose than attempting to cling to the rails, poles, lines, or other apparati available.

(Above, John T. McCutcheon political cartoon; click image for blog of Robert Paterson or here for information on the artist)
2 - The band members were hired to provide entertainment and civility to the passengers. We seek music for many reasons: enjoyment, worship, solace, and more. No doubt the passengers associated the music on the voyage with community and normalcy (for those nervous about being on the water, I would wager that the music helped them reduce the stress . . . ironic since there was much to be stressed about that, initially, they could probably not have imagined). The band members, though they would never cash their paychecks, were still "on duty" and maintained the role of "calming agent" - as much as possible - in those very last moments on board the Titanic. Brave souls, yes, but what else could they do?

And so the bands play on. 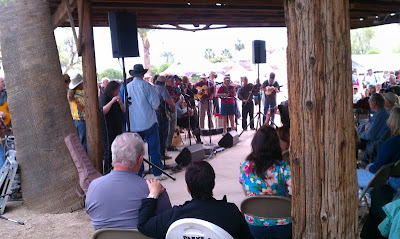 (Above: The Big Band finale at Glendale, AZ, 20 March 2011)
Again, I bemoan the fact that this phenomenon is becoming less and less commonplace in our schools. Who will play the dance music on the cruise ships? Who will entertain at the weddings? Who will play the marches at the parades? It may be up to the private citizens to keep the bands playing by encouraging children to take music lessons, form the garage bands, entertain in family bands at nursing homes and family reunions. Don't let the music die! Most of us who play in concert with others will never have to "go down with the ship," but that is what's happening to music in the schools. Help keep it playing!
Posted by Jean Hibben at 10:40 AM