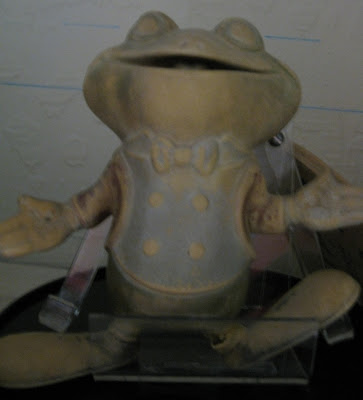 Do you remember Froggy Gremlin, and the opening phrase "Plunk your magic twanger, Froggy!"? My husband and I have argued about whether it is Froggy Gremlin or Froggy THE Gremlin, but, according to what I'm finding on the Internet, my husband is correct with his addition of the article and THE wins out (I hate when that happens).

When we were kids, my brother and I obtained this rubber Froggy toy (located at a rummage sale, where the large abundance of our toys originated). Problem: my mother bought it and gave it to her 2 children, 6 years apart in age (Bob is the older). When we were children living in the same household, this was not a problem, but when we grew up we needed to determine ownership (of this as well as a large number of books, records, and toys). The books were fairly easily "divvied up"; ownership of most of the stuffed animals was also fairly easy to assess (one or the other of us was usually given the animal originally and though we had "traded" stuffed animals throughout our childhood, we decided that original ownership would be the determining factor); most of the records had been purchased for my brother, so he got those, with the understanding that all would be recorded and we would each have recordings of everything; but Froggy was a problem. He had literally been given to both of us. So we decided he would make the journey between Illinois and California on an annual basis, taking the trip each Christmas. We'd each have custody for a year, then he'd get to move to the other household.

In about 1978, my brother sent Froggy to me with a note that he could no longer handle the travel stress and that he was to stay with me. By this time, his rubber body was feeling the wear and tear and was rotting in places, most notably, his left foot. So I got him a little protective "display case" and there he stays, enjoying a spot of honor in our "frog room."

An interesting addition to this story: in 1979, my brother came to California and visited me. We went to a swap meet and there we found, low and behold, a king-sized Froggy Gremlin (at least twice the size of the little rubber guy I had). My husband (who loves to barter) bargained the seller down to $25 to get the toy for my brother. Now we each have a Froggy and many great memories of the TV show and how we used to watch it together.

(Note: all links provided above are to different bits and pieces of Froggy the Gremlin history, for those desiring to wallow in nostalgia.)
Posted by Jean Hibben at 6:00 AM