Dad (L. Roy Wilcox) died in 1999 and lived the last years of his life disgusted with modern technology (he had no use for cable TV, VCRs or video cameras), but he had been on the cutting edge of computers with his work at the Illinois Institute of Technology (he had wanted to build his own computer, but never got around to it). Nevertheless, whenever I would get a new gadget, he would scoff at it, declaring that the "old stuff" was good enough for him (he "preferred" audio recordings to video, perhaps a throw-back to the radio era, and would record on his homemade, mammoth reel-to-reel recorder any television shows that struck his fancy).

But he was not always that way. When my brother was born, it took him only a couple of years (and a hatred of borrowing equipment that belonged to friends of the family) to purchase an 8mm movie camera, projector, and screen. In fact, when a home audio recording system became available - allowing someone to actually make his own records that would play on a standard record player (78 rpm) - he purchased the entire system. I still own blanks of those "vinyl" (not really - these are breakable) records and the metal disc that was used in preparing the final product. I also have all the original recordings made of my brother and me singing songs that need not be reproduced here or anywhere, reciting nursery rhymes, and even creating and performing in our own "radio quiz show" (don't ask). The actual machine that recorded the material and cut the grooves is long gone (discarded when tape recorders became affordable and Dad built his first one from a Heath Kit), but the microphone remains! Here is the microphone from those early recordings (done in the late 1940s and throughout the 1950s) and is maybe why I have no problem using a microphone today (hey, I was weaned on one!): 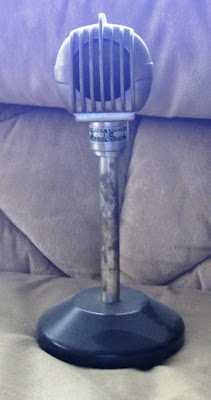 (manufacturer: Turner Crystal)
Posted by Jean Hibben at 8:00 AM