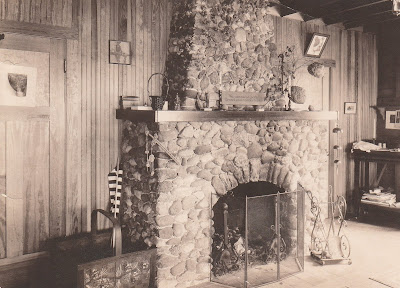 In December, I posted a photo of my grandfather's deer head, he had mounted over a fireplace at his cottage at Beaver Lake, near Hartland, Wisconsin (click on the words "dear head" to read that explanation). Here is the fireplace, prior to its being adorned by said dear head.

"Why is this a treasure?" You might ask. Well, as you can see in the photo, there are a number of artifacts. And, as I have mentioned before, my family had no idea what a wastebasket was (note: there is no such object in the photo). At the far end of the fireplace, hanging from the mantel, you can see a set of 3 Chinese dinner gongs. Those are now hanging in my kitchen (though the string and bottom tassel have long since been replaced). Above the doorway at the far back in the photo is a picture of a bulldog. That picture now hangs next to my back door. In the foreground, also hanging from the mantel, is a strange sword - it's made of Oriental coins, tied tightly together. I have no idea whose it was (in the family) or how it was acquired, but it is now part of my brother's treasures (one of the few things he claimed from the family collections). Other items in the photo met fates unknown long before I showed up on the scene . . . well, maybe my ancestors did know what a wastebasket was after all.

Cottage was designed and owned by Hans Peter JOHNSON and his wife, Emma Marie HOLLANDER; rocks that were used in the construction of the fireplace were quarried from a nearby location. This photo was taken about 1920. I was back to visit the place about 16 years ago, after my Mom died, and I could not recognize the outside or the yard, but the folks living there now let me in to see what they've done with the inside - it's beautiful - and I recognized the fireplace: still there, still solid (no deer head, of course), and still bringing me fond memories.
Posted by Jean Hibben at 8:00 AM