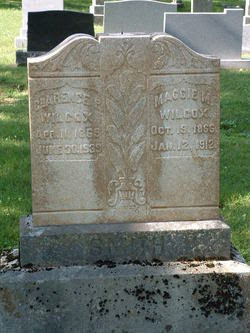 In an earlier post, I recognized the stone of my great-granduncle, Clarence P. Wilcox, and how it had fallen on the ground, Wilcox side down, and was put up straight under some unusual circumstances (click on his name above to read about & see photos of that extraordinary experience).

Last month, on Find-a-Grave, I found the photo, above, of the stone, now in place on its stand (though the Wilcox side has SMITH on the base, meaning that the Smiths, who are buried in the shared plot, have WILCOX on the base of their stone). I don't know who did it; as far as I know, there are no family members of Clarence's who would care (though Maggie, his first wife, had a daughter by her first husband and maybe there is family in that connection that were instrumental in this operation). Or, perhaps, the monument-maker returned to clean the stone and put it in place. Or maybe the cemetery took care of it. Whatever and whoever was involved, the photo is attributed to our favorite photographer: anonymous. But I want to thank those who put Clarence and Maggie back up, even if they are on the opposite side of where they belong and, presumably, their bodies lay.

Maggie, whose first husband was a Jones, died on 12 January 1912, 98 years ago today. I know very little about her, except that she and Clarence were married on 11 February 1894 in Nashville, Tennessee, and she brought a daughter, Mary P. Jones, into their home with that marriage. Her sister was Martha, who married Jacob Edelen, and Clarence and Maggie were living with them in 1900. After Maggie's death, Clarence married Jennie Smith on 21 September 1919 in Nashville. She had been previously married to James Greenhall and their daughter was Reba Greenhall. 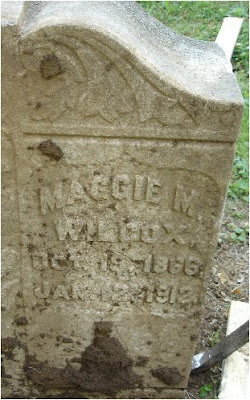