It's hard to believe that we are into the second quarter of 2012. I am glad I didn't put up Christmas decorations in 2011 or I would just now be taking them down. It has been a crazy 3+ months since we flipped the calendar page. Much has been good, some has been great, and some has been the sort of stuff we just need to do (and not all of that has been accomplished!). Much has also been neglected in the maelstrom of "stuff." This blog has been one of those things. I am a firm believer in "if you don't have something nice to say, then don't say anything," but I will take that a step further: "If I don't have anything to say, I'll also keep my mouth shut." With the unveiling of the 1940 census, I have been kept busy with so many projects that other "stuff" has been shoved into a corner. Well, that corner is now overflowing and pushing into the room, so I will let you know the biggest news around here, then will enter a new blog post on an old (and favorite) subject: me. No . . . music!

January found me in Salt Lake for the Salt Lake Institute for Genealogical Studies. I learned a lot - most importantly that my Lee ancestry is likely to be fraudulent. I mean, the family existed and my family was connected to them, but I discovered that there is no familial link. I am grateful to the Lees of Decherd, Franklin County, Tennessee (later of Dallas, Texas) for taking in my great-grandmother and, later, my great-grandfather, but I find no proof of a Lee line in my tree. I'm OK with it; just have to go back to the drawing board (and make some adjustments in my RootsMagic file!).

February found me again in Utah - this time in St. George for the Family History Expo. Great people there; lots of fun, networking, and helping at the Ask the Experts table. I do love those events and, not having a table that I was responsible for, I got to sort of kick back instead of run from place to place. Yay!

March found me on the road again - to the Glendale Folk & Heritage Festival in Arizona. I love that event, too. The day before the festival I gave a mini-seminar in Mesa and we had a nice crowd. The dogs were along for that trip and enjoyed all the activities of the weekend.

Of course, April 2 was the unveiling of the 1940 census and I was busy throughout March giving presentations on what to do with it once it was released. I've been hearing great reports from folks and am thrilled to see the indexing progress by so many groups. We need to keep up the momentum.

But I have noticed, especially since January 3 (the first anniversary of the passing of my beloved dog, Buddy) that I really missed having a 4-legged companion to wander cemeteries and be my genealogy helper. Don't get me wrong - I love my little Alaskan Klee Kais (miniature huskies), but they don't have much interest in cemeteries and are really not as "into" the whole "stay still while mama talks about dead people" (or dead dogs, for that matter). So I think that "funk" I was in was just needing a little boost from a pup. Last week, while my husband was clicking on some links he was sent on Facebook, he went from one site to another until he was staring at a rescue dog, in need of a home, that was the spitting image of our Buddy. She was ready to be adopted the next day from a shelter only a 40-minute drive away (but not one we had ever heard of so we would never have looked there on our own). We went out to meet her and, two days later (with her minus a few female things) she walked into our home. The shelter had named her "Rain." At first we just planned to rename her, but she seems to personify Rain, in all the good ways - she has rained down an amazing spirit in our home. She is like a rainbow the way she smiles and bounces around the house. So we have named her after the Civil War song "Lorena" and nicknamed her "Rain." She sits and listens to me talk about my ancestors and doesn't move a muscle. She gets along well with the "Klees" and they all travel around the house as a pack, but she has claimed me as her property. We have yet to visit a cemetery, but I plan to arrange for that ASAP. Did Buddy or one of my ancestors send her to me? I don't know. I believe that there are things at work beyond the realities we are aware of in this world and I think that things happen for a reason. I'm just going along for the ride!

Funny how the addition of one thing in the home can change an atmosphere (positively or negatively). The wrong influence in a home can change the attitudes and communication styles of the entire household. The inclusion of a positive influence can make a tense atmosphere calm again. And Rain has been a great influence on my writing, so stay tuned . . . I should be doing a lot more blogging. But don't be surprised if a lot of it includes my little Rain dog (and probably the others, too . . . if they will stand still long enough). 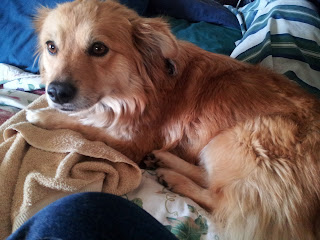