When the Past Returns, or, Be Careful What You Write Today . . . It May Visit You Tomorrow

Once upon a time, in 1969, I began writing songs. Sometimes I wrote entire lyrics and music; sometimes I adapted my lyrics to other (usually old) tunes; sometimes I made new verses for already established songs.
I still do it. My latest effort is a song set to the old folk tune "Greensleeves," dealing with the Federal Census. Some day (yes, I promise), I will have it as an MP3, downloadable from my website. But this is a story about lyrics written back in 1969.

The magazine Sing Out! (to which I subscribed from about 1963 until about 6 years ago when the politics seemed to overshadow the songs) had a column written by Pete Seeger entitled "Johnny Appleseed, Jr." He would discuss different issues in the Folk Music field, often putting a scholarly slant on it (his father had a doctorate in Folklore and I always thought that was one of the coolest things possible). I responded once to something he had written and he was kind enough to write back. Before too long, we were maintaining a correspondence, however sporadic.

I remember his discussion in the column once about a story of a little boy who was trying to transport things from his aunty's home to his mother, but never could seem to get it right (he brought home butter in his hands and it was all melted by the time he got home . . . his mother told him that to bring home butter he needed to wrap it in cool leaves and carry it carefully home. His aunty gave him a puppy and he nearly smothered the critter by bringing it home all wrapped in cool leaves. His mother said that he should tie a string to a puppy and bring it home by walking it behind him. His aunty gave him a loaf of bread to which he tied a string, dragging it home . . . well, you get the idea). I had a copy of a book that told that story, but my book was written back in the pre-1950's era when people were less sensitive about ethnicity and it was a very racist portrayal of a particular race. I sent copies of the pages from the book to Pete and he wrote me a nice thank you and even mentioned the receipt of it (sans my name) in his next column, along with reports on his receipt of other versions of the story. How the story was adapted to different cultures was of interest to Pete (and to me) and his discussion of what we call "The Folk Process" often cropped up in his columns.

The Folk Process deals with how songs and stories are adapted and changed over time (much like playing the game of "telephone" at a child's birthday party). Pete wrote a column on the great song by Woody Guthrie, "This Land is Your Land" and how it has become almost more well-known than the National Anthem (at least among school children). What was not included in the initial version of the song are three other (slightly more radical) verses Woody wrote that were almost lost to obscurity. But the folksters out there won't let that happen and the lyrics of those "lost verses" have been added to a number of songbooks and are sung at folk gatherings all over. And others have written additional verses, sometimes adapting them to personal or regional circumstances. Pete included a few in that column and I guess I was inspired. I wrote a couple of verses myself and sent them to Pete via US mail (this was long, long before the Internet). He wrote me a nice little note and said, "thank you for two new verses." And that, as they say, was that.

Fast forward over 40 years to friends of mine, traveling in Virginia, visiting with a gentleman who had received a book from Pete Seeger, autographed to him. My friends were looking through the book and found (on page 144) two "new" verses to "This Land is Your Land," written by "Jean Wilcox from Illinois." They emailed me to ask if I'd ever written verses to that song. At first I started to deny it (it's been 42 years, remember), and then I decided to Google it. Sure enough, in 1999, on the Mudcat Cafe discussion boards, Art Thieme (a Chicagoan that I had known back in the old days of Old Town music and coffee house performances) mentioned one of my verses as having been printed in a magazine or newspaper column by or about Pete Seeger. Well, when I read the lyrics (slightly mis-printed, but not enough to change the meaning), I was taken back in time, remembered the original column, the note Pete had sent to me, etc. Apparently, both verses made it into the book Pete wrote in 1993 (it's on the 3rd Ed. now): 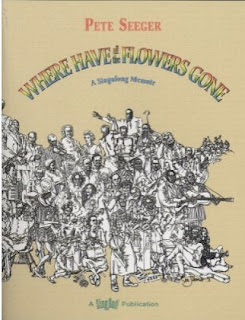 Good thing: it's not already in my library (wouldn't that be embarrassing? to have the book and not even know I'm quoted in it). Bad thing: I have record of only one of the verses I wrote; no knowledge of the lyrics of the second verse (but I've ordered the book and will soon correct that issue). Still not sure how I missed having that book in my collection, but that will be remedied and I look forward to my own little ego trip as well as reading the rest of the material, which sounds to be quite interesting.


Moral: What you write today may pop up somewhere you least expect it tomorrow. And, with the Internet that is even more possible. So, to those asking for those census song lyrics: I have to do some "protection" things before I post them anywhere. I'll get it done soon, I promise.

Email ThisBlogThis!Share to TwitterShare to FacebookShare to Pinterest
Labels: Art Thieme, Jean Wilcox, Pete Seeger, This Land is Your Land