I have family that came from Green County, Wisconsin, and, since it is a rather small area, I thought it might be fun to see if I could trace the Postmasters there in the mid-19th Century. I discovered some interesting things that I am going to share with you in this and future blogs.

First, let's look at what the opening "page" looks like for the listing of Postmasters appointed during this time period (there is some overlap of records so do not expect to have the listings fall neatly into place): 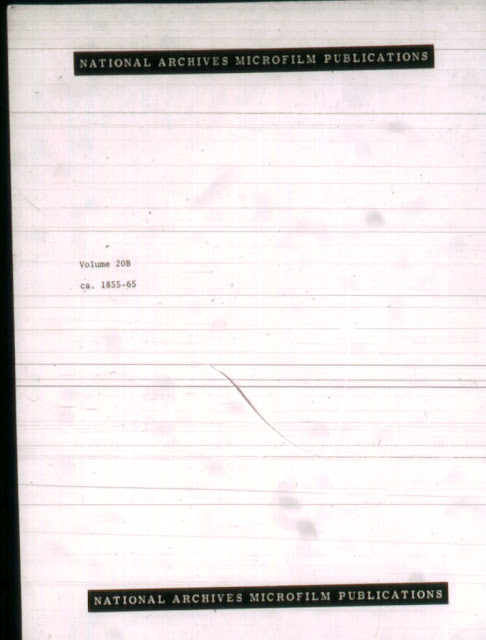 (all images posted here are used with permission of the National Archives, Pacific Region, Riverside County, CA)
Obviously, I will be interested in cross checking information found here with the 1860 Federal Census and, if applicable, any state census schedules that fall within this time frame of 1855-1865.
My normal suggestion is that, if you discover an ancestor lists him/herself on the census as a "Postmaster" or "Postmistress" (or even just working for a Post Office - who knows, a promotion could be just around the corner), you would want to check these records for the information about the appointment and what Post Office was involved (just because a person lived in a given town, say Albany, it does not mean that that is the same town where he/she served as a Postmaster).
As a reminder, these records are defined on my earlier blogpost and directions for finding which Archives houses the referenced microfilms is on a still earlier post. Follow those links for the information and aids in understanding why these records are of value to genealogists.
So I looked up Green County, Wisconsin and discovered that there are 32 towns and townships within that location. Of course, there were significantly fewer back in the mid-19th Century and some of the ones that were there (e.g., Shuey's Mills, Farmer's Grove, and Willet) are not listed on the RootsWeb site (some may have been abandoned while others may have been subsumed by larger communities). When I go through the history of the towns of Green County, I find some of the same names as those listed in the Postmaster pages. Some towns (Shuey's Mills, for example) had, as the first or subsequent Postmaster, the same person for whom the village (hamlet, crossing in the road, etc.) was named. In the case of Shuey, though he was a Postmaster for some period of time in the 1850s, by 1860 he pops up on the County Poorhouse roster in the census, leaving one to believe that being a Postmaster might not necessarily have been a lucrative profession in that time.
In fact, all but one of the Postmasters I traced in the census listed other trades than the USPS as their means of making a living. There were farmers and merchants, for the most part (the latter makes perfect sense as many of the Post Offices were housed in the General Store, making the store-owner also the Postmaster, by default). In one situation, the job of Postmaster seemed to be passed from one family member to the next as folks moved or (apparently) died.
The value of these records is quite interesting, though not particularly obvious, at first. A recording in the Postmaster logs is more likely to have an accurate spelling of a person's name than we find in the census. It also clarifies where that person was working during a fairly specific period of time: while the appointment date is provided, the next recorded date is when the Postmaster's successor was appointed, not when the previous individual left the position . . . it is possible that the position might have been vacant for some length of time. Just because a Postmaster has vacated the position does not mean that the person died; he/she might have moved or been dismissed from the job for some reason or other. Other records that might help clarify the circumstances would be vital records, newspaper articles, historical information from the county (some Post Offices were discontinued because the town ceased to exist or was incorporated into another community), tax records, military records, etc. I presume that my readers are familiar with the various sources for some of these items, but welcome your inquiries if you need some guidance there.
And so now you may have a bit of a lead as to why these records can have significance to genealogists. In future posts I will give some specific examples of how these can be useful and what mysteries can be unearthed (or created) as a result.
Stay tuned . . .
Posted by Jean Hibben at 11:52 AM