I remember (just barely) making a cigar-box ukulele in kindergarten. We had to provide the cigar box (in those days, if a kid's parents didn't smoke - rare - a cigar box could be procured at the local drug store - ours was Lyman-Sargent's in downtown Wilmette) and strings (I believe they were rubber bands) were fastened to the bottom (on nails that I am sure the teacher pounded in) and stretched up the body of the "instrument" (the cigar box) along a "neck" (not sure what that was) to be fastened (I don't recall how) to the "head" (probably just the end of the neck). I don't recall any way tuning could be accomplished but, hey, the sound it made would not have been improved had there been "string" adjustment possible! We strummed away on our little noisemakers, pretending to accompany the music teacher (playing loud enough on the piano to pretty much drown us out). Now whether we also played the sand blocks at the same time, I don't remember, but I do remember "making" those (why we say we "made" these things is beyond me as the teacher was the one wielding manner, knife, staple gun, scissors, etc.). They were blocks of wood, wrapped in sand paper. I have never liked the feel of sand paper (why I was happy when my husband bought me my "mouse" - a little electric sander), but this past weekend I found myself again making sand blocks (my "mouse" makes a terrible musical instrument, but it's very handy to smooth rough surfaces; on the other hand, my quickly constructed sand blocks sounded pretty darn good!). I used the sand blocks in one of the songs we just recorded for the latest CD: "Songs of Early Childhood" (songs our ancestors sang as children) . . . but more on that later, when it is finally ready for distribution.

Anyway, here's my point (took long enough to get to it, didn't I?): creating instruments out of raw materials is nothing new. Our ancestors did it for centuries! And some were pretty darn creative. And some were marketed to the general public. And some, thankfully, have never been heard of since.

When we attended the Glendale, AZ Folk Heritage Festival last month (March 2010), I was amazed to find that there was a "homemade instruments" workshop. I didn't attend it (I was obligated elsewhere), but I did talk to Pat Clark, the creator and player of the most elaborate Cigar Box Guitar and Dobro I have ever seen. He was kind enough to let me take his photo & agreed to let me share it here on this blog. These instruments have been electrified with pickups so they can be plugged right into an amplifier (bet my kindergarten teacher would never have imagined that!). Of course they use conventional tuning pegs and real instrument strings (no rubber bands here) so they can be tuned to precision! Ah, we've come a long way. 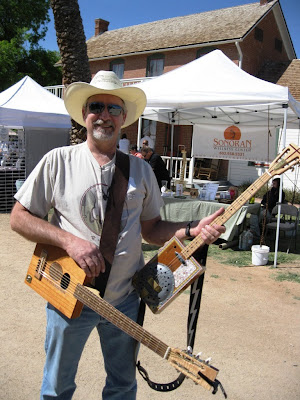 I had been thinking about these homemade instruments for some time so running into Mr. Clark was a special treat. I did a little "Googling" to see what I could find and discovered that there is a whole Cigar Box instrument musicianship out there. Check these out:
David Beede (giving information on how he made it as well as demonstrating it)
Gus (showing the instrument construction and demonstrating its sound)
It's not just for guys, check out Shelley Rickey's instrument

Then there are similar (stringed) instruments made from other handy objects:
The cookie tin banjo (demo and construction info)
The gas can banjo (make sure the can is empty before construction or playing)

Another advantage to these unique instruments: unlike conventional guitars, they pack up easier for travel all over the world. Gus shows how this all comes together on his YouTube video (and he also shows the pickup workings for those wanting to "go electric").

Want one of these unique instruments for yourself, making you guaranteed "life of the party" (if you dare bring it along)? "eHow" will show you the construction procedure from scratch. If you're not that handy and want the raw materials supplied, Elderly Instruments (one of my favorite suppliers of musical instruments and accessories) has kits! Not a DIY kind of person? Buy one ready-made from "Papa's Boxes."

One of the fun aspects of these cigar-box (and other homemade instruments) is that they can be as elaborate or as plain as you wish to make them. Tom of CigarBoxUkes.com has a lovely display of his instruments, all uniquely decorated. They end up being utilitarian, decorative, and vintage items all at the same time. What house wouldn't be more lovely if sporting one of these on the parlor wall?

But there are other forms of homemade instruments. Our earliest ancestors discovered that banging on our natural resources (logs, rocks) or shaking things that grew in their vicinity (dried out cactus, seed pods, etc.) created melodious sounds. We have modernized such things into drums and maracas, but the inspiration behind these 21st Century instruments is worth remembering.

Earlier this week, my friend Thomas MacEntee sent me information about a "rock xylophone." I had heard of the stones that make music when struck, but this is taking it to the next level. Check this blog by The Ancient Digger. There is a short video that is included here (with links to others) and I am greatly impressed by the sound. Not sure what songs from my repertoire would be enhanced by this, but I'd be willing to try . . . next time I'm in North Cumbria, UK.

So when your child (grandchild, great-grandchild) comes to you with the "instrument" (oatmeal box drum, trash-can lid cymbal, water-filled bottle - hit or blown across) that was made in daycare or preschool, suggest a singalong! Who knows, that instrument could very well metamorphose into a life-long passion (I've been playing guitar for over 45 years . . . not counting the cigar-box ukulele hours).
Posted by Jean Hibben at 8:00 AM