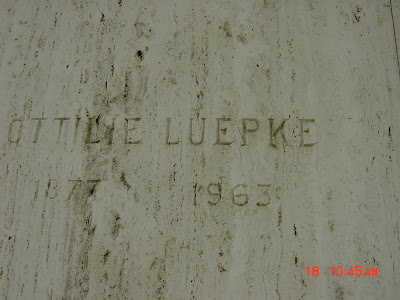 Ottilie (Aunt Till) was my grandaunt. I never knew her because she moved from Illinois to California after I was born and died before I got out to the West coast. I knew her daughter, my 1st cousin once removed, however. So I finally went to visit her grave at Forest Lawn in Long Beach, just before they made restrictions on photographing headstones and getting information about those buried there. Ottilie was cremated and her remains are in a vault, as are those of other, more distant family members.

Her life was a hard one and much of it spent as a single mother. She finally decided to join extended family in California. She was interred in Sunnyside Memorial Park, which was later purchased by Forest Lawn.
Posted by Jean Hibben at 7:00 AM