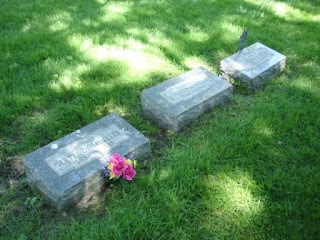 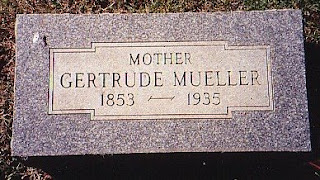 Gertrude MUELLER was born in Bonn, Westfalen, Germany on 17 February 1853 and immigrated to the United States in 1874, joining her mother who had fled Germany in 1864, leaving Gertrude and her siblings to be raised partly by an aunt and partly by the Catholic Church in Bonn, where she was planning to take her vows when her mother and step-father sent for her to join them in New York. Soon after her arrival, she took on the name of her step-father - WOLBERT - but on 10 May 1876 she married Carl Frederick (Fritz) MUELLER, bringing her name back to its original form. She used to tell people, "I was born a Mueller, I married a Mueller; I changed my name for no man." (Of course, that negates the fact that she used WOLBERT for a couple of years between things, even declaring it her maiden name on her marriage registration and on her children's birth registrations.) Gertrude moved a number of times, but called Chicago, Illinois home for the majority of her adult life, dying in Wilmette, Cook, Illinois on 14 July 1935, 74 years ago today, and was buried in Memorial Park Cemetery, Skokie, Cook, Illinois, next to her son and daughter-in-law. She was my great-grandmother.
Posted by Jean Hibben at 8:00 AM